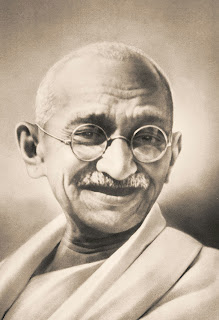 The larger part of my life has been more  influenced by physicist , bollywood stars , cricket stars . Post then has been more about the domination of inspiration over influence. After the suggestion from by closest friend I started going through "My experiment with truth" in my second year of graduation.  For the first few month I managed to complete just 60 pages of ebook.  But the honesty so plainly expressed  had already  struck the first cord. Then a little bit of google about Gandhi , his famous and unfamous writings were absorbing me almost homogenously . But lately I found many were not of the same view as of mine , so I left discussing about him. I thought may be I don’t know the history much so better is to be quiet .

Then after a break of a year , finally  got the hard copy of  "My experiment with truth". Since then I have been stormed by numerous radical transformation in my thoughts .Whether its my growing ability to restrain myself from nonsense criticizing of others , ability to accept the mistakes , ability to take the pride with humility in noble deeds , ability to introspect, strong believer of piece and above all ability to give. And few pending things which I might take a little longer is to love selflessly , sacrifice for the cause ,truth and humanity are all dedicated to Mahatma . With his plethora of inspirational quotes  ,he keeps inspiring  me thousand times  .

Whether his sacrificing nature or ability to accept his greatest or guilt shame or practicing his verse with such consistency or the concept of non-violence , satyagrah , non-cooperation movement or  his principles of swaraj  . He has been like a trendsetter  of peace and humanity.
A  thin common man always motivating with his relentless long walks , stick and a gita in his hands and a always glued smile , experimenting world's most uncommon noble deeds. When world was busy making atomic bombs , he kept teaching thousands of his countrymen about non-violence ,, he taught us to discard english clothes , he made us to make salt for our own , he fought for thousands in foreign land of south africa  and  yet our  generation keep criticizing him for INDIA-PAKISTAN  many more which I don’t even know.But for  me and many others he kept inspiring us . 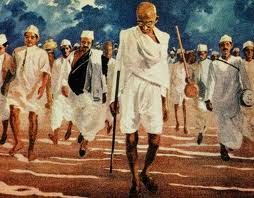 I feel saddened to see today people especially Indians criticize  Gandhi but praise Martin luther King who himself  was ardent Gandhi follower. We keep comparing between bhagat singh and gandhi ,  patel and gandhi etc. We are dividing our own country , we are cutting our own souls. Instead of uniting two good souls we continuously try to prove superiority of one over others. Being from educated class of India our thoughts should not be drifted along with the wind rather lets have our own unbiased ,researched notions atleast for these great people.

On his 144th birth anniversary I dedicate this to Mahatma Gandhi , hopefully someday some of us learn  from some of his reminiscences and above all take pride in saying yes Gandhi is the father of nation. Because if we know him , if we study him not through the spectacles of others , we will know that Gandhi was a magnificent phenomena , who processed every second , who transformed every minute for the better. A few shortcoming everyone has and he also had but he himself said "
Freedom is not worth having if it does not include the freedom to make mistakes.".Lets remember the mahatma on his "birth anniversary and world non-violence day" for the truth he stood for , for sacrifice he made , for the pains he underwent for his countrymen .
Posted by ashish kumar pathak at 3:08 AM